Sarasota is the most dangerous traffic city in the State of Florida according to ValuePenguin.

Sarasota County had the highest number of self-identified binge drinkers according to a study by the Institute of Health Metrics and Evaluation.

The City of Sarasota averaged 12.2 deaths per 100,000 residents per year over a recent three-year period, making it nearly twice as deadly as the second most dangerous city, Lakeland, according to the financial site ValuePenguin, which is part of the online lending exchange Lending Tree Inc.

Sarasota had the largest leap in DUI deaths over the course of the study, which tallied the total number of fatalities caused by DUI-related crashes reported by the National Highway Traffic Safety Administration’s Fatality Analysis Reporting System.

ValuePenguin, which examined statistics for 180 cities across Florida, found that 73 percent more people were killed in Sarasota from 2015 to 2017 compared with the previous three years. 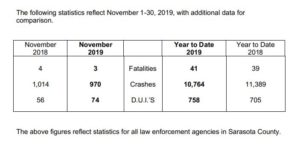